Born Nkeng Clinton Nji, Bun Pot is making a name for himself in Cameroon’s rap scene as a young and promising rapper and songwriter.

The video of his debut single “Achombo” produced by Payne under the label OVADOZE Nation Music was released in June 2018. Selfie, his second and latest single under the same label and produced & mastered by Akwandor was released on November 17th 2018. 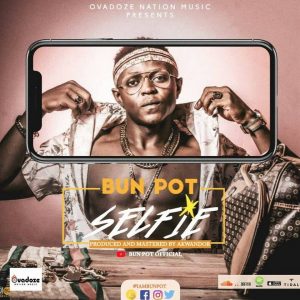 The song narrates how some of us youngsters (girls especially) are obsessed about the selfie trend, a phenomenon brought about by social media and the mobile web.

Perhaps you had a good hair day, or the light in the snack you were chilling at was super flattering, or you were just feeling yourself. Whatever the reason, you’ve certainly turned that camera around and snapped a selfie.

Bun Pot in this video however exposes some odd aspects of the trend. Given how popular selfies have become, there are bound to be a few freakish trends that emerge as more and more people opt to indulge in the occasional selfie. Everyone prefers different angles or poses based on what best showcases their features and physique, but let’s be honest, there are some selfie trends on social media that we’re just sick of and the boyz too are fed-up with.