Juventus star Cristiano Ronaldo finally met his new teammates after his £100m move from Real Madrid.
Ronaldo resumed pre-season training with his new side and was at the Juventus base in Turin the first time since he signed for the Italian giants.

The 33-year-old was pictured exchanging pleasantries with his new teammates as he familiarises himself
Gonzalo Higuaín, Paulo Dybala, Juan Cuadrado were some of his teammates he met on the first day at his new club.

Ronaldo was also put through a number of tough physical tests designed to test his fitness ahead of the new season,

Ronaldo only returned to Turin on Sunday after he was given an extended break following his 2018 FIFA World Cup campaign with Portugal.
The football star signed his Juventus deal in Greece where he was holidaying after the World Cup and had a brief stay in Turin for his unveiling. 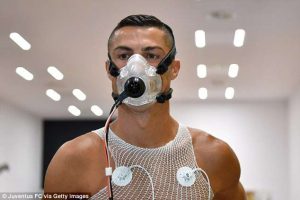 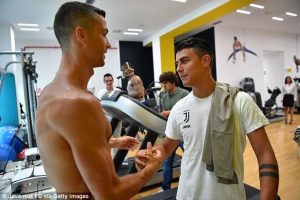 Nigerians React As Wizkid And Tiwa Savage Get Sexually Romantic In Fever Video And It Is Wild!

Sathom J: The Talented Cameroonian Artist Who Knows How To Seduce His Audience