On Instagram, celebrities are trying to challenge Ivanka Trump, the daughter of the President of the United States, by flooding her news feed with messages. They call for the resignation of Kirstjen Nielsen, Secretary of Homeland Security in Trump’s administration, responsible and surety of migration policy “zero tolerance” that separated families trying to cross the border illegally with Mexico …

Cages, crying, children taken by force from their mother breast breastfeeding … Testimonies have multiplied and the chilling images have unveiled to the general public the face of migration policy “zero tolerance” Trump.
In June, the American President had finally changed his mind by signing a decree ending the practice, and allowing young people to find theirs … And yet at present, 559 minors out of the 2,551 of origin would still be retained , says CNN.

A sudden change of policy, which some (including Trump himself) explained by fierce protests from relatives: his wife Melania publicly opposed the policy, and even visited children imprisoned in detention centers while her husband, meanwhile, was visiting the families of people who had been killed by immigrants … 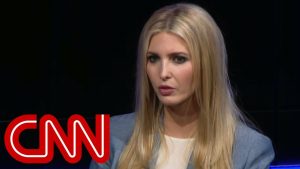 It is now his daughter, Ivanka, who broke the silence a few days ago: she spoke for the first time about her father’s migration policy.

“I am fiercely opposed to the separation of the family,” she told CNN, “these are not easy problems … and, like the rest of the country, I was very moved. “

Ivanka Trump has thus been put under the spotlight, and many now hope to influence migration policy through it … Notably on Instagram, via an unprecedented method.

Mary Karnehl : The 237 Artist’s First Single Will Blow Your Mind!

Nigeria: Over 4000 Teachers Sacked For Incompetence

The Video Of Stanley Enow’s Latest Hit Single “Elle Est La” Is Out!

Chidinma Ekile Is Married To Kizz Daniel And Now Pregnant For Him?