Sweet, sweet and so sweet! What else can we expect from Mr. Leo, the reigning 237 Afro Pop king? I wonder where this guy purges all this inspiration from. Seriously, this song will melt even the most harden female heart.
Well guys, ‘J’ Suis Désolé’ is the latest release of our one and only, Alpha Better Record artist Mr. Leo. It was set loose yesterday January 8th, 2018 during a release party organised at the Chill (former kokobar), Molyko, Buea. 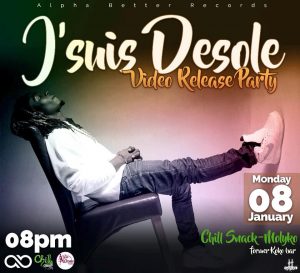 Composed by Mr Leo, produced by Salatiel, and a video directed by Shelis, the song is an apology from Mr. Leo to the woman he loves.

From all indications, Mr. Leo had been taking her love for granted until of recent. The guy finally realized how much he really loves the girl and is trying to make amends for his past actions so as to regain his lost love.

Beautiful Melody, the end result will certainly be as hoped for.
Bravo, Mr Philantropy…
This is the YouTube link for all those who want to WATCH. Don’t forget to drop your comments below the Video.