Born of a Cameroonian father and a French mother, his mixed race is at the center of his creativity, constantly renewed by his travels and artistic encounters in Europe and the United States. But Africa remains the source, the dominant culture of his artistic expression.
1961, Manuel “Wambo” Wandji born in Nancy (France) where his father was studying.
1970, departure for Cameroon where the little Manuel discovers his second homeland; his family moved to Yaoundé. Then begins his real musical awareness: the sound universe of the equatorial forest, urban and traditional music.
In 1975, when teenagers took him to clubs in the city’s popular neighborhoods, Wambo did not resist and began to “hit” with his high school friends: the first group, the first concerts.
1980, departure for France. While pursuing technical studies in Besançon, he discovers new musical styles and meets the dance milieu for which he will continue until today to compose (Cie ACCRORAP).
1986, he creates the Cie METISSAGES where he is dancer and musician.
1988, he arrives in Paris and plays for Ray LEMA, Papa WEMBA … The scene “world” is rich and Manuel sails in various formations and discovers work in the studio.
In 1992, he realized an old dream: to create his own recording studio, his own structure, in order to compose and produce freely: WAMBO PRODUCTIONS was born.
1994/1995, while preparing his first productions (see discography) he accompanies Geoffrey ORYEMA, plays for the show “Nulle part ailleurs” of Canal + with invited artists such as Ben HARPER, Manu DIBANGO or Tom JONES …
1995/1999 he reveals the Cameroonian Henri DIKONGUE to the public by producing his first 2 albums (“Wa” and “C’est la vie”) and will tour with him all over the world for 4 years.
1997, a tour in France with Kenyan acrobats JAMBO MAMBO.
In 2001, he accompanied Régis GIZAVO, Malagasy accordionist.
2002, he records for the DJ Martin Solveig (Album “On the ground”)
2003/2004: first project as a singer-songwriter under the pseudonym WAMBO (Afro-reggae) and first tours with his band and release of the album in Cameroon in 2005.
2005, he records and accompanies the Gabonese singer Pierre AKENDENGUE.
2005/2006: he begins to invest in the Parisian scene with the “Voices of percussion project” and his dancing friends … show that he plays today in the whole world.
2006, receives the césar of the best Cameroonian artist of the diaspora (Canal d’or) by the television channel Canal 2.
2006: he creates and finances the collective CULTURE MBOA in order to sensitize the Cameroonian public on the misdeeds of the piracy and to organize an independent network of sales of original CD’s.
2005/2011: He joins the group “VOICES” based in New York and performs with them in the world.
2006/2013: International tours and recording of images and music on 3 continents.
2013/2014: Release of the album and the movie “Voyages & Friends” (Buda Musique / Universal)
In 2016, he produced and arranged the album of the Cameroonian singer Gaby FOPA “empty Calabash”.
Production of the clip and title WE LOVE FOOTBALL on the occasion of the African Cup of Nations Nations.
2017, Release of the first single “Bolè Bolè” under the pseudonym of WAMBO. 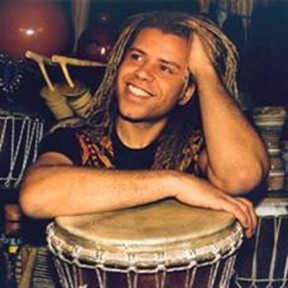 In Cameroon (the country of his father) Manuel Wandji is also very recognized under the pseudonym of WAMBO. Another side of the artist who gives pride of place to the texts mainly in French (the country of his mother) and the voice. A very mixed reggae serving words to both personal and social matters.

A first album “Near me, far from here” was released on CD in December 2005 only in Cameroon. Phenomenal success with the tube “It’s not easy” in duet with Henri Dikongué. A title that has touched all generations of a large part of francophone Africa from Kinshasa to Abidjan!

WAMBO receives the Golden Channel “prize of the best artist of the diaspora” in 2006 by the Cameroonian television channel Canal 2. Unfortunately, the widespread piracy in Cameroon has not allowed Manuel Wandji to benefit from his works for several years…

His new title “Bolé Bolé” and the remix version with DJ Roland was released in June 2017.

The song is available online and can be downloaded as ring back tone on MTNZIK.

Latest From Locko; New Video “Booboo” Is Out

Music: Petit Champion Releases the Video of His Single “Validé” !