Two days before the royal wedding, Meghan Markle confirmed Thursday that her father will not attend the wedding. In Windsor, it’s time for the dress rehearsal and the little singers find it hard to hide their impatience. 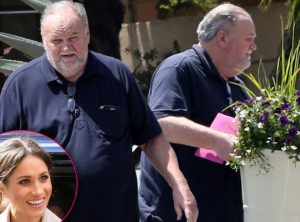 Meghan’s father, Thomas Markle Sr, 73, had heart surgery on Wednesday and told the TMZ people news site that he was “fine” but needed “time to recover”.

Before this announcement, his presence was already questioned because of a controversy born from the publication of staged photos, showing him preparing for the wedding.

Thomas Markle had confessed to being paid for these photos, even as he complained of being harassed by the paparazzi. A rehearsal of the royal wedding was held Thursday in Windsor, the opportunity to tweak the last details before the D-day On Saturday, some 250 members of the armed forces are expected, the highlight of the day being the carriage procession of newlyweds.

Is Nicki Minaj Pregnant With Nas’ Baby? This Is The Complete Story