After starting the year in the most beautiful way with a show in Bafoussam, the city that nursed him from birth to adulthood, Stanley Enow strikes again.
While his hit title “Caramel,” featuring Nigerian superstar Davido is still making Cameroon, Africa and the NBA games in the United States vibrate, the soldier like his father, does not sleep.
Indeed, King Kong announces the release of his new single titled “ELLE EST LA” for March 2, 2018. 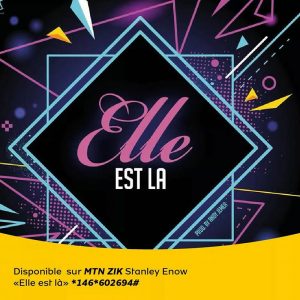 The video that was shot in South Africa, celebrates his love for a special woman who is always there for him.
Directed by Stanley, a namesake of the artist under the SOS Media label, ELLE EST LA  can already be downloaded on MTNZIK as a caller ring back tone by dialling * 146 * 602694 #

Music: Salatiel Sends Out Powerful Message In New Single “One By One”