Teebillz has for the first time come out to speak about the relationship between Wizkid and his estranged wife, Tiwa Savage.

The music executive took to his Instagram page on Monday, September 10, 2018, where he posted a photo of Wizkid and himself. He went on to reveal that he believes Wizkid will never cross the line with Tiwa Savage.

“Weather you like it or not Ayo is my lil bro and he knows not to cross me on blood Gang ❤️….. we don’t play that shit on 400 blocks! That’s my lil Nigga and is Big Hommie Sauce kid aka Sinzu guaranteed me on the lil homie even though he’s my blood and Mr Capable Banky W is my blood! ……… I’m just saying this to the general public that tend to come at me on some disrespectful Shit!!!! For your information!

“Thank you Titi for respecting me! your opinion on her and my lil bro S#lkea #Wiz is bullshit! Don Jazzy will never allow that!!!! Tiwa gets mad me on my own P but she will never put me down like on Jamil#!!!!! So FuCK your opinion @tiwasavage @wizkidayo keep giving us that         Musically ….. it’s all #EntertainmentandStyle,” he captioned the photo. 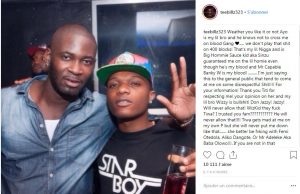 Teebillz until now had never said anything about the rumoured relationship between Wizkid and Tiwa Savage. It would be recalled that a few weeks ago, Tiwa Savage also for the first time spoke about her relationship with Wizkid.

In an interview Tiwa Savage got to talk about how she has been able to handle the rumoured relationship between Wizkid and herself.

“We are friends definitely. To be honest, I think I have been in this industry for a long time, I have grown a thick skin so comments like that, genuinely, honestly don’t bother me that much. I am kinda used to it. Today is humblesmith, tomorrow it’s Wiz, it’s just what it is, it’s part of the job,” she said.

When asked about her relationship with ex-husband, TeeBillz and if she had any advice for anyone married, Tiwa declined to answer saying it was a very sensitive issue because of the parties involved which include her son.