His silence is every day a little deafening …

“La même” is the title of the problematic video release by Congolese born artist “Gandhi Djuna” better known as Maitre Gims, performed in duet with Vianney.

For Maitre Gims, the month of May is obviouslya very painful one. After being accused of having redone the Italian “Bella Ciao” revolt song for commercial purposes last week, it is his new album’s turn to be the target of criticism.

On May 21, a young Belgian director and photographer, Charlotte Abramow, posted a disturbing image on her Twitter account to report the similarities between her video, made last March for the song “Les passantes” by Brassens, and that of Maitre Gims released not less than a month and a half later!

All fingers point to the fact that Maitre Gims really did it … OR NOT? 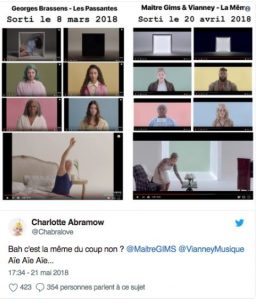 (Video) Montess Opens Up About Her AFRIMA Win And Fires On Salatiel!