In the aftermath of the crazy DJ Arafat outing that which he revealed to have been in a relationship with Josey, social media users were quick to mix the Ivorian footballer in this case, by attributing remarks to him on the web. And that, Serey Dié has just paid the price.

Words in which the 2015 African champion, who also had an affair with Josey (which resulted to the birth of a child), taunted Arafat, accusing him of failing to keep the singer at bay.

“What strategy did you put in place to have her? You could not do something, that’s why she preferred me, “said Serey Dié.

But a close friend of the Ivorian international that we contacted to verify these claims, brought a formal denial.

According to him, these words are the “imaginary fruit of some individuals who have fun inventing stories to create buzz”.

“Serey Dié does not have time to indulge in trivialities. All that is said about him is archifal. It’s really unfortunate. He has never expressed himself on this subject (the Arafat – Josey affair, Ed) and he will not do it, “said our interlocutor, thus making his “development “.

According to him, it is in 2012 when Josey was not yet known that he will confess his intentions to marry her. Unfortunately, he says, Josey told him that she had a boyfriend and that it would be difficult to leave him. Crazy in love, he agrees to wait and hopes that she will come back to better feelings. And finally, he rejoices, this patience will bear fruit. 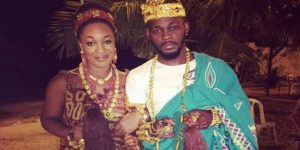 “She told me openly that she had her boyfriend. I said ok. But when her boyfriend and she broke up, I put my name down and we started seeing each other again. We started the little ” love ” until I discovered the call of Serey Dié one day. But she told me he was his godfather, “he said.

But where everything got spoiled, he says, is when Josey asks him to buy her a Range Rover. “I refused to buy the Range Rover and to my surprise, she is pregnant with Serey Dié’s child. The one she introduced to me as her godfather was actually her lover. She belittled me for Serey Dié leaving me for him. And that because I refused to buy him a car,” lambasted Beerus Sama.

“Josey did not care about my mouth,” he convinced himself before confessing that he was waiting for the occasion to “show her that you do not joke with the Daishikan”. Hence, he argues, the release of this song “Kaïkilada” in which he accuses Josey of “dating a player for a car”. And still in rage against the singer, DJ Arafat threat to deliver even more details in case the mother of the child of Serey Dié amused to answer him. “It’s because I do not want to go into the details but if she answers me I will say why she is clashing with Emma Lohoues,” he warned.

Sport: Zinedine Zidane to Next Coach The French National Team

Music: Salatiel Sends Out Powerful Message In New Single “One By One”