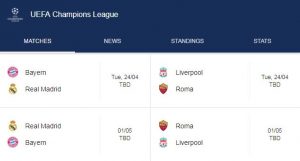 The Reds, who beat Manchester City 5-1 on aggregate in the last round, will host Roma on Tuesday, 24 April with the return leg on Wednesday, 2 May.

The Gunners will play the first leg at home on Thursday, 26 April, with the second leg a week later on 3 May.

The Europa League final will be in Lyon, France on Wednesday, 16 May, with the winner guaranteed a place in next season’s Champions League.

The Champions League final will be held in Kiev, Ukraine on Saturday, 26 May.