While Nimes Olympique launched a contribution to acquire Samuel Eto’o, the Cameroonian striker has offered to make his contribution. In the tone of the joke, of course.

“All the big clubs have in their squad great players: Neymar at PSG, Falcao at Monaco, Benezet at Guingamp … And Samuel Eto’o at Nimes Olympique?” Very inspired, the promoted Nîmes has chosen to play the card of humor to react to the rumor sending Samuel Eto’o, the former player of FC Barcelona and Inter Milan, at the Stade des Costières.

Thus, the Nimes Olympique launched a Leetchi pot to finance the eventual arrival of the Cameroon star who, this time it is serious, could move to the Ligue 1 according to Foot Mercato. A kitty that could allow the club gardois to recover up to five million euros, according to the generosity of its supporters … or Samuel Eto’o himself. Because the former player of Antalyaspor, also amused to judge by the emojis used in his tweet, asked Nimes Olympique if he could participate in said pot. That he does not deprive himself! 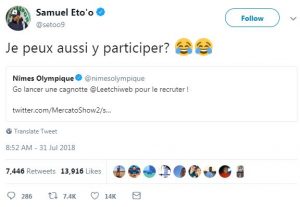 Everything is ready for the arrival of Eto’o in Nîmes, and Denis Bouanga joined the buzz by offering the former scorer of Indomitable Lions to give him his No. 10. But in case of failure of the transfer (a hypothesis not to be neglected), Nîmes Olympique has promised to donate all donations to Restos du coeur. So really, Samuel, do not hesitate! 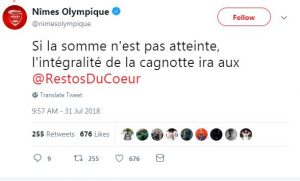 Love Story: This Is What Fally Ipupa Said About His Wife “Nana Ketchup”

Nappy Hair: All You Need To Know About Natural Hair Care