Meghan Markle ’s family feud has hit humiliating new heights after her furious sister clashed with security on her doorstep.

Samantha Markle flew to the UK determined to confront her younger sibling after a bitter fall out.

These exclusive pictures show how she arrived uninvited at the home the Duchess of Sussex shares with Prince Harry – but was turned away. 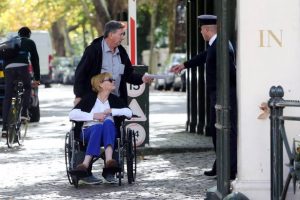 Demanding to see Meghan, the outspoken 53-year-old was then locked in an embarrassing standoff with police guarding the gates of Kensington Palace.

Fuming, she eventually left after handing over a note to an officer.

It was the culmination of a lengthy row, which has been played out in an excruciatingly public way. 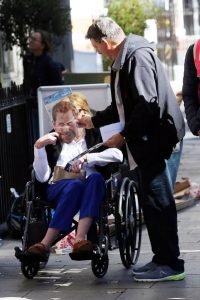 Samantha, Meghan’s half sister from her father’s first marriage, has vented her fury since she was denied an invite to the wedding.

She called Meghan, 37, “cold” for ignoring their dad, accused her of fake waves and smiles, called her the DuchASS and labelled Harry a “wuss”.

Meghan’s half brother Thomas, 51, has also added to the circus. He slammed Meghan when he was also missed off the wedding invite list and has called for his sister to make amends with their dad.