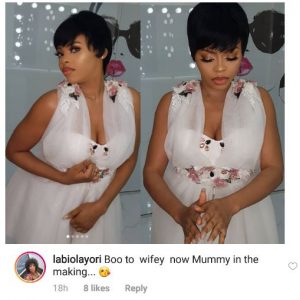 The comment was made on an Instagram post by the singer which shows her dressed in an attire mostly worn by pregnant woman. Reacting to the picture, Labi Layori said ”Boo to wifey now mummy in the making”.

If the comment is true, then one can only expect Kizz Daniel to be the man responsible for Chidinma’s new status. The affair between the singers became public knowledge few months ago.

(Video) Montess Opens Up About Her AFRIMA Win And Fires On Salatiel!