Don Jazzy has made Mavin Records one of the leading record labels in Nigeria and six years down the line, the label is celebrating a period filled with success stories and uncertain times.

Following the dissolution of his former label, Mo Hits Record formed in partnership with D’banj, Don Jazzy founded Mavins Records, also known as the Supreme Mavin Dynasty on May 8 2012.

Pop music has undergone a continuous change in its sound and appeal in the country since the early 2000s and one of the major progenitors of this is Don Jazzy. 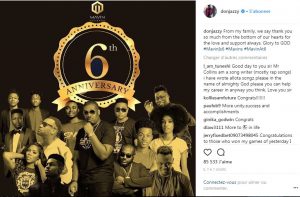 For eight years (2004-2012), the prolific beat-maker alongside D’banj successfully drove Mo Hits to the pinnacle of the Nigerian music industry, so it was expected that he continues the success story with the revamped Mavin.