Hugo Boss founder of the Hugo Boss German luxury fashion house has announced that they will mark Michael Jackson’s 60th birthday by reissuing the iconic suit worn on the cover of ‘Thriller’.

The suit, consisting of a sleek white jacket and trousers, won the fashion house worldwide acclaim back in 1982 and now, they’ve opted to celebrate their own part of pop history after the album went on to become of the most influential albums of all time.

Although Hugo Boss remains faithful to the original design, the new suit will have a narrow silhouette and retain two pleats on the trousers. Buttons will also feature on the jacket cuff. 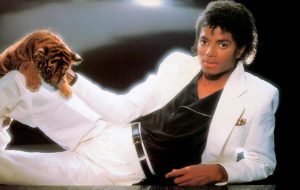 The fashion brand also announced that new white t-shirts will be made, modeled on the design of the original suit.

It is yet to be announced when the suits will go on sale.

Meanwhile, it was recently announced that the estate of Michael Jackson is currently earning more money than the late artist did when he was alive.

According to the Mirror, Jackson’s estate earned $74 million (£57.4 million) in 2015. The details have come to light in a 73-page court document which was filed at a Los Angeles court by his executors.

Those earnings include publishing rights, which brought in $2,448,584.99 (£1.9 million) in that year. Jackson’s merchandising arm, Triumph International, was the biggest-earner for the estate during that time period, bringing in $18.8 million.