When the 20-year-old black girl was only 11, she noticed a white spot on her finger. After more than seven years trying to hide an increasingly perceptible state, she decided to become rather the epitome of a positive body movement – this decision changed her life.

When Mariah noticed for the first time the white spot on her finger, she did not really pay attention to it; her mother reassured her at the time saying that there was nothing to fear.

In the years that followed, however, she noticed more and more white spots on her skin, to her dismay, they kept getting bigger. 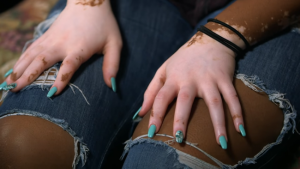 Mariah has a condition called vitiligo characterized by white patches of depigmentation on the skin.

As was the case with Mariah, the disease usually begins to manifest in early adolescence, it rarely develops before this period.
Mariah was taken to a doctor where she finally got her formal diagnosis. 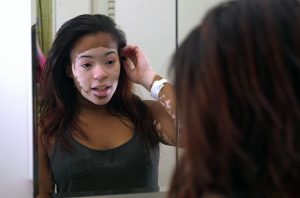 Makeup has become a part of her everyday appearance. From shopping to spending the night at a friend’s house, she was never able to do without it; during evenings, she even went so far as to keep the makeup full when she went to bed, getting up before everyone else to make sure she could do the alterations.

Micheal Jackson: The Late Artist’s Estate is Currently Earning More Money Than He Did When Alive

Nappy Hair: All You Need To Know About Natural Hair Care