Shoulda woulda coulda. Tyga, 28, was still Kylie Jenner‘s boyfriend when the now 20-year-old launched her lip kit collection in November of 2015. Now her cosmetics line is worth nearly a billion dollars by momager Kris Jenner‘s estimates to Forbes magazine.

T-Raww is kicking himself for letting his longtime GF get away as she rode her wave to riches. “Tyga is furious over Kylie’s billion dollar Forbes cover. His anger is mostly with himself for not making things work with Kylie who is now super rich and successful. Tyga has struggled with finances over the years, but he never had it as easy as when he was with Kylie and he misses the luxurious lifestyle they shared. He misses their life together, especially now that she is practically a billionaire. 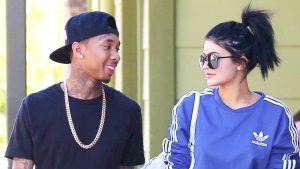 Per Kris’ claims, Kylie’s cosmetics empire is worth $900 million and she is on her way to becoming the youngest “self-made” billionaire when she turns 21 in August. The Forbes cover featuring the reality star drew a ton of criticism, with even dictionary.com calling out the “self-made” claim. 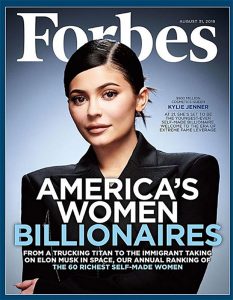 Kylie was born into a life of wealth and privilege with celebrity parents and had resources many people could only dream of having access to. She claims that she used $250K she earned from Keeping Up With The Kardashians and modeling jobs to start her company.

“Tyga helped encourage Kylie over the years, while they were together, and thinks a lot of her success is because of his advice, love and support. He is mad they are no longer together because he feels he should be able to enjoy that billion dollars too…he helped her get it all,” our insider adds.

Tyga did have it pretty sweet when he was with Kylie. She would gift him with expensive sports cars, they would fly everywhere on private jets and he got to live large like the Kar-Jenner clan is known for. Kylie even threw lavish birthday parties for Tyga’s son King Cairo, 5. His life with her was pretty sweet. 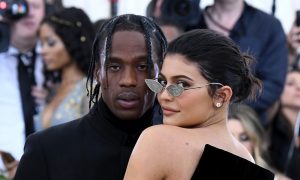 Ever since Tyga and Kylie broke up after nearly three years together, she went on to date Travis Scott in the spring of 2017 and have his baby daughter Stormi Webster on Feb. 1, 2018. Now Travis is forever tied to the soon to be billionaire, while Tyga still owes a ton of money in back taxes to the IRS, is battling former landlords over unpaid rent and his rap career is waning while Travis continues to reach new highs. The baby daddy rapper even tweeted out his loving support for Kylie, showing her Forbes cover and telling the world how proud he is of his mega-successful girlfriend.